Expressionist Artworks at the Stanley Museum of Art 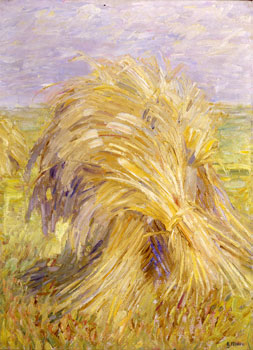 Franz Marc (German, 1880-1916)
Getreidegarben (Sheaves of Grain), 1907
Oil on canvas, 31 in x 23 in
Gift of Owen and Leone Elliott 1968.65
Before Franz Marc progressed toward the theoretical practices of Der Blaue Reiter, the revolutionary artist group he co-founded with Wassily Kandinsky in 1911, he was oriented to the popular philosophy of the unity and harmony of man and nature. Getreidegarben is an up-close-and-personal, almost interactive depiction of harvest time in a field of grain. In fact, Marc wrote about "a feeling for the organic rhythm of all things, a pantheistic feeling of oneself into the quivering and flowing blood of nature, in the trees, in the animals, in the air." It is interesting to note that Marc's father, who was a landscape painter and professor at the Munich Academy of Fine Arts, died in 1907. 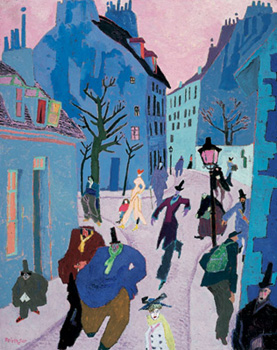 Lyonel Feininger (American, active in Germany 1871-1956)
In a Village Near Paris (A Street in Paris, Pink Sky), 1909
Oil on canvas, 39 in x 32 in
Gift of Owen and Leone Elliott 1968.15
Cartoon-like characters appear to be hurrying down a village street at dusk in late autumn. Implausible colors and a variety of perspectives define the composition. Feininger's fantastical representation of urban street life seems to capture a moment in time much as a photograph does - as an embodiment of the distinctive characteristics of modern life. Buildings frame a narrow winding street populated by an assortment of villagers while workers in their non-descript rough clothes, ladies in their fitted coats, and gentlemen in their top hats scurry in all directions. The distorted, confined figures underscore a sense of haste. The use of multiple viewpoints for the buildings and the contrasting colors further support a sensation of activity.

Feininger lived in Germany and France from 1887 to 1937. He first worked as a commercial artist and then at age 36 he began to paint. In 1909 he was a member of the Berliner Sezession and was associated with Die Brücke, the Novembergruppe, Gruppe 1919, and The Blue Four. He also taught at the Bauhaus for several years, beginning in 1919. 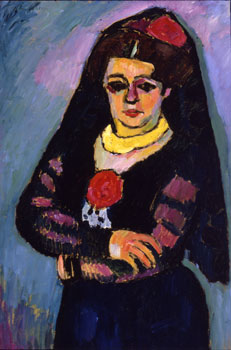 Alexej von Jawlensky (Russian, 1867-1941)
Spanish Woman with Mantilla, 1910
Oil on canvas, 38 in x 25 in
Gift of Owen and Leone Elliott 1968.57
Systematic constellations of color and spontaneous flowing lines define and link planes in this passionate portrait of the artist's wife dressed as a Spanish dancer. Bold, arbitrary colors dominate her face and strong black pigment outlines her figure and mantilla. Jawlensky's use of color was drawn from Fauvism, which he experienced in Paris. The painting is also representative of German Expressionist style inspired by Jawlensky's life in southern Bavaria working with the artists Gabriele Münter and Wassily Kandinsky in Murnau. 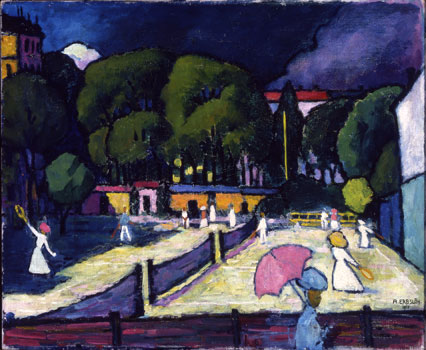 Adolf Erbslöh (American-born German, 1881-1947)
Tennisplatz (Tennis Court), 1910
Oil on canvas, 21 in x 26 in
Gift of Owen and Leone Elliott 1968.66
Using a Fauve model of expressive, unreal colored form outlined with black and dark blue, a typically conventional scene of people playing tennis is transformed into a strangely lit afternoon of play. The harsh green foliage and the dark blue and purple sky suggests an approaching storm - perhaps alluding to the advance of World War I.

Adolf Erbslöh was one of the founders, in 1909, with Alexej von Jawlensky, Wassily Kandinsky, Franz Marc, and Gabriele Münter of the Neue Künstlervereinigung Munich (NKV), which predated Der Blaue Reiter. In exhibitions from 1909 to 1912, this circle of artists presented stringently stylized forms in saturated colors with an emphasis on rhythmic surfaces. 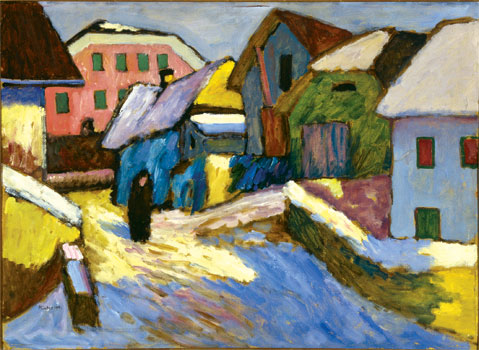 Gabriele Münter (German, 1877-1962)
Schnee und Sonne (Snow and Sun), 1911
Oil on cardboard, 20 in x 27 in
Gift of Owen and Leone Elliott 1968.63
Münter's depiction of a rural life, which modern culture seemed in the process of destroying, expresses her desire to return a lost balance between humanity and nature. Münter "felt" color, and her lines functioned to simplify her forms, creating a distinctive visual "personality."

In Schnee und Sonne, a rural scene is presented with vivid colors reflecting the artist's association with German Expressionist styles. Münter was one of the few women associated with the movement and one of the founders, with Franz Marc and Wassily Kandinsky, of the group Der Blaue Reiter. Schnee und Sonne was once owned by the artist Franz Marc. 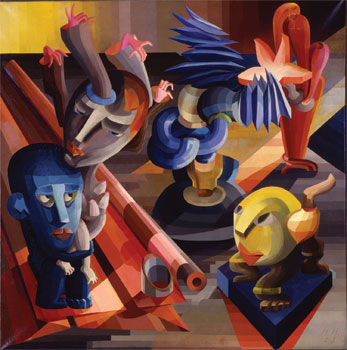 Hannah Höch (German, 1889-1978)
Locking Powers, 1929
Oil on canvas, 38 in x 38 in
Museum purchase 1985.52
Hannah Höch's Locking Powers recalls in a dream-like vision her past relationship with former husband Raoul Hausmann. She portrays herself as a many-breasted Artemis, a Greek goddess unable to be freed from the clutches of Hausmann because her arms are paralyzed by her thoughts.

One theory of the meaning of the absurdist game depicted here is that the color blue represents Raoul Hausmann, a founder with Höch and John Heartfield of the Berlin Dada art movement, while the pink tones represent Höch and her creativity, and the yellow, Höch's and Hausmann's dreams for a child. The "modern," machine-like parts of the painting are unified by Höch's motif of chromatically evolving stripes. 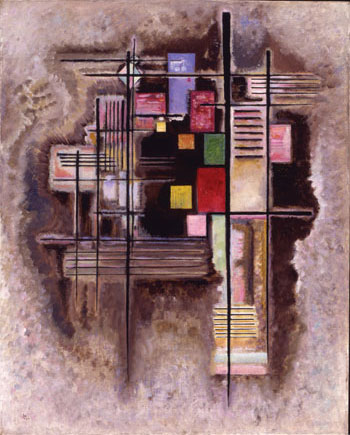 Wassily Kandinsky (Russian, 1866-1944)
Verdichtung (Compression), 1929
Oil on canvas, 39 1/2 in x 31 1/2 in
Gift of Owen and Leone Elliott 1968.26
This "square of tensions" suspended in space is an expression of Kandinsky's belief that he could visually represent nature using new scientific theories related to rhythm, proportion, measurement, weight, color, and space. Kandinsky invented a system he called "compression" based on balanced polarities using a grid of horizontal and vertical lines in opposition to color planes.

Wassily Kandinsky's Verdichtung is an example of the artist's change in style from his earlier free-form abstractions to the "hard-edged" works that occurred following his appointment as an instructor to the Bauhaus school in Weimar, Germany in 1922. The Bauhaus, founded in 1919 by architect Walter Gropius, was a design school that was devoted to examining all the arts as a single enterprise, based on principles of good design and a wide-ranging exploration of materials and techniques. The emphasis was on architecture as the universal language of form that would unite all the arts to create a modern utopia. The motto of the Bauhaus was "Art and Technology - A New Unity." 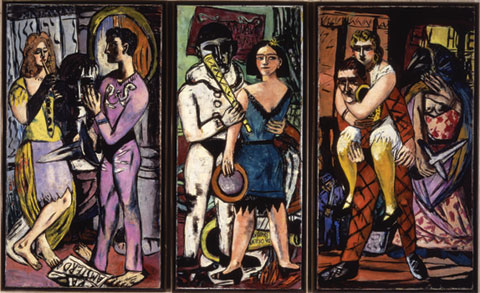 One of Beckmann's nine triptychs, Karneval is thought to symbolize the three ages of man, presenting a kind of morality play about Adam and Eve in modern dress. On the left stand a young, idealized man and woman, and on the right a middle-aged couple is being driven out of the Eden Hotel by an angel wearing a bird mask. The Eden Hotel actually existed in Berlin and was frequented by Beckmann. Beckmann could have reflected on his own status at the time Karneval was painted: nearly sixty years of age, he was one of Hitler's "degenerate" artists, an outcast living in exile in Amsterdam. In the center panel an old, disillusioned Adam dances with a much younger woman, perhaps a prostitute. The features of the large bust in the left panel are strongly reminiscent of Hitler, suggesting that the entire ensemble refers to the insanity of World War II.